Dear Customers,
The Automobile Club of Monaco informed us about the cancellation of the Grand Prix who was supposed to take place in May 2020.
Following the instructions of Monaco Authorities, and reinforced by the suspension of the races by Formula One until the month of June, to ensure the protection and well-being of the pilots, spectators and all those working for the event, due to the spread and threat of the Covid-19 pandemic.
We are looking forward to welcoming you again for the 79th Monaco Grand Prix in May 2021.


Experience the Monaco Grand Prix in a unique way, different to Grandstand seats and the Paddock Club, we offer a large selection of private terraces, rooftops, and apartments with spectacular views of the circuit. In addition to this First Class Organisation invites you to create your own customised space.

As leaders in Private Corporate Hospitality, First Class Organisation selects only prime viewing locations overlooking the starting grid of the Monaco circuit. Our venues can be arranged for a wide variety of clients; Formula One teams, sponsors, and tour operators. Some of our terraces and suites are opened for group bookings.

With 20 years of experience, the team at First Class Organisation has had the opportunity to carefully select the different venues along the track to better race viewing. With choices of higher and lower viewpoints such as rooftop terraces, apartments with balconies, restaurants, hotels, grandstand seating, and garden viewpoints.

Our knowledge of the course and the venues on offer helps to guarantee a successful stay and experience with First Class Organisation. Due to the high level of know-how we prepare and arrange terraces, suites and hospitality for some of the highest ranked companies in the world, as well as hosting one of the most famous Formula One teams.

First Class Organisation recognises the high level of professionalism these companies and groups set for themselves and uses it as an inspiration to provide the best logistic services and organise receptions of the highest quality.

The Shangri-la is a luxury residence located on the starting line. Apartments from high floors are appreciated by the Formula One Teams and sponsors. The Shangri-la is the only building to offer covered reception desks and 6 comfortable and fast elevators to access the suites. The Shangri-la offers a personalised welcome, fine dining on site, non stop races broadcasting on large flat screens and a panoramic view on the track. 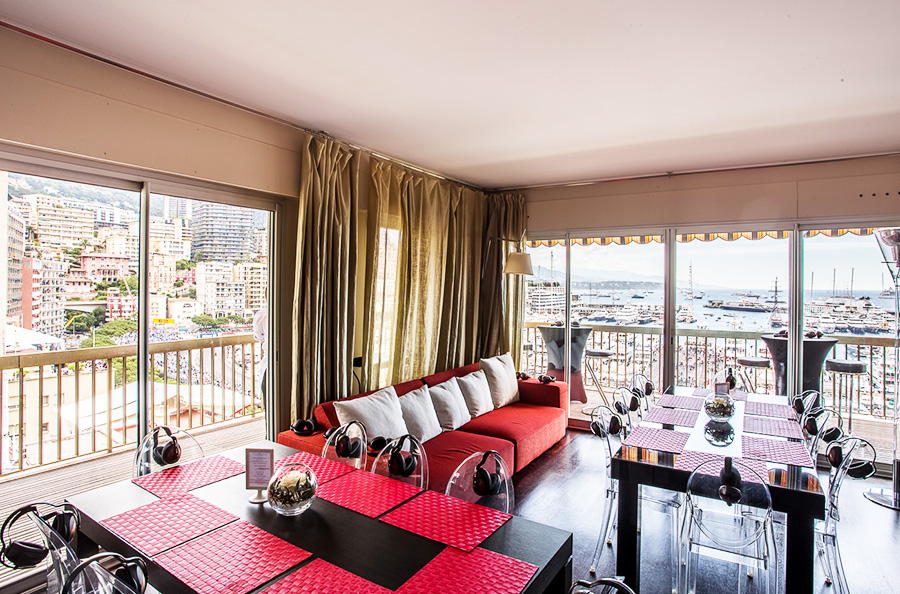 Our balconies of the Palais Heracles assure you to be closer to the Monaco Grand Prix race. With our terraces you can enjoy a global view on the Pole position and the Prince lodge, but particularly on the start/finish grid. You’ll also be right above the checkered flag when the race winner crosses the line. The race atmosphere is guaranteed and will delight the most demanding amateurs. 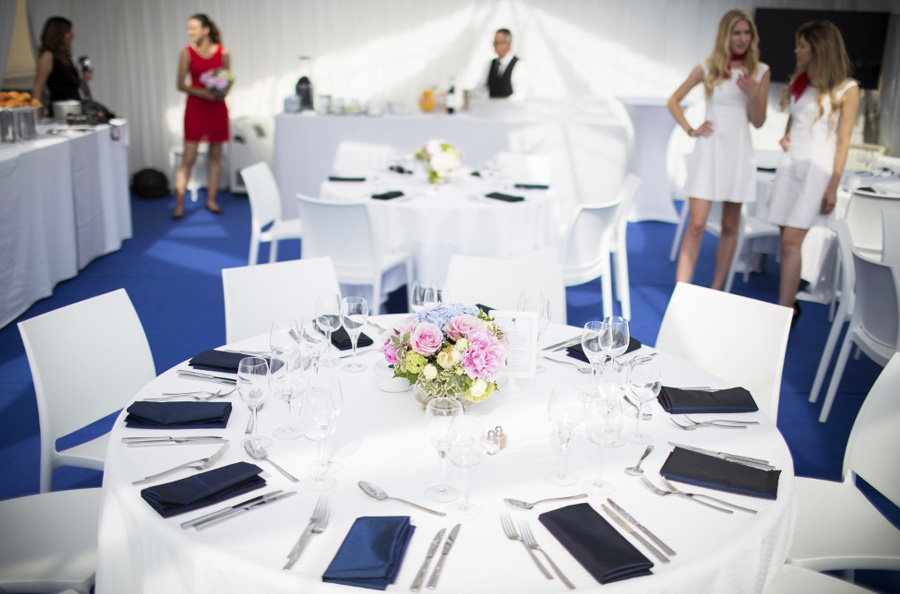 The Monaco Historic Grand Prix take place every two years on the famous Formula One Monaco Grand Prix street circuit. First Class Organisation launches a Revival Hospitality Offer. The retro-vintage touch of this event, the live music and the hostesses in their period dresses will take you back to a journey into the past. 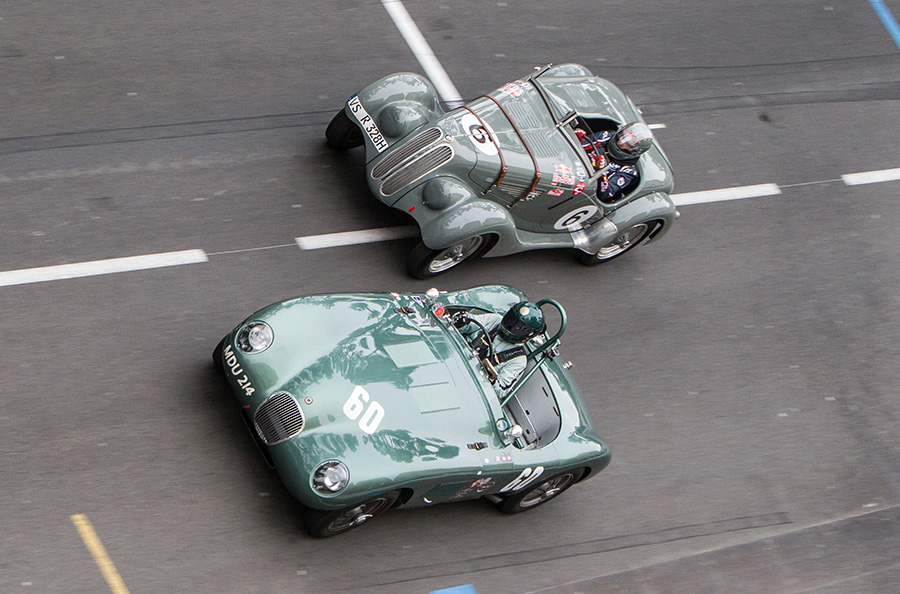 The Shangri-La is a luxury apartment building, ideally located on the boulevard Albert 1er above the starting grid of the Monaco Grand Prix. The event cannot be more stunning than from our terraces (from the 7th floor and up) especially thanks to the race views they offer: the starting line, Monaco Port corners and the avenue d’Ostende. Our Shangri-La boxes are available with several high-quality services. 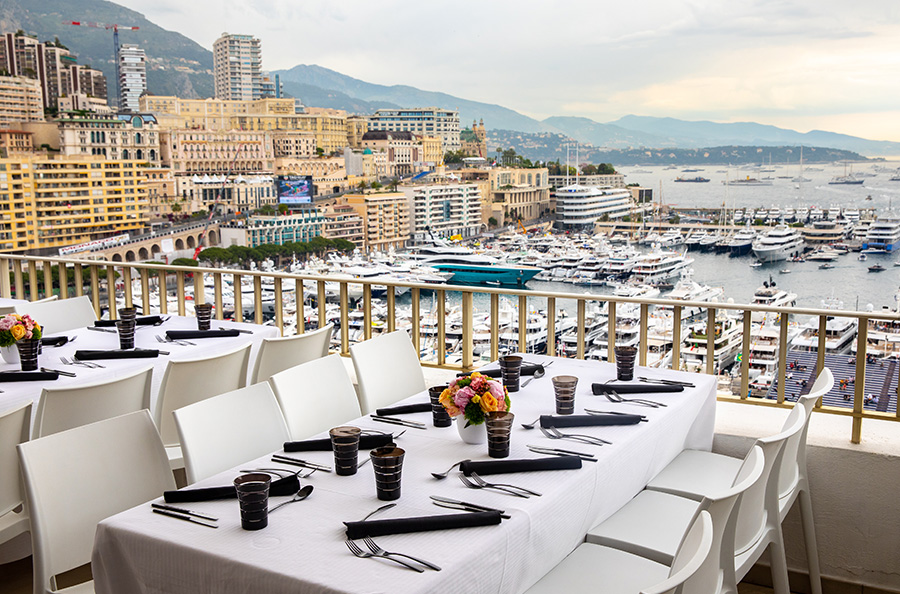 Our balconies of the Palais Heracles assure you to be closer to the Monaco Grand Prix race. With our terraces you can enjoy a global view on the Pole position and the Prince lodge, but particularly on the start/finish grid. You’ll also be right above the checkered flag when the race winner crosses the line. The race atmosphere is guaranteed and will delight the most demanding amateurs.

The Ermanno Palace building is located on the famous Saint Devote corner, more geographically known as Turn 1 of the idyllic Monte Carlo street circuit. The starting line, Monaco Port corners and the avenue de Ostende are also visible. Our packages guarantee you a VIP service over-looking around 60% of the circuit. 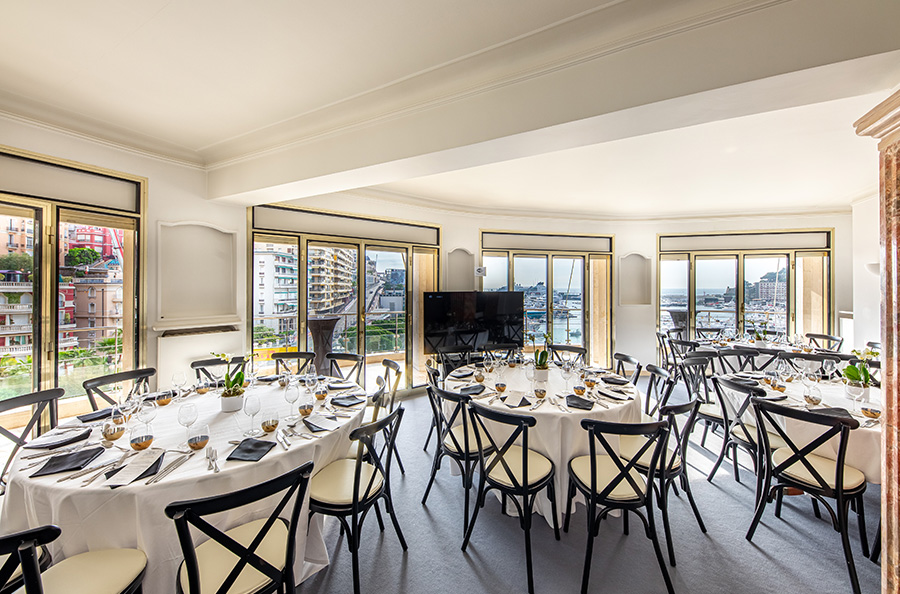 Our terraces situated in the Caravelle & Bristol buildings guarantee you a sensational show. Our apartments offer you extraordinary views during the race with the starting line, the Port corner and the Sainte-Devote corner. These locations guarantee our hosts to experience breath-taking actions on the starting grid. 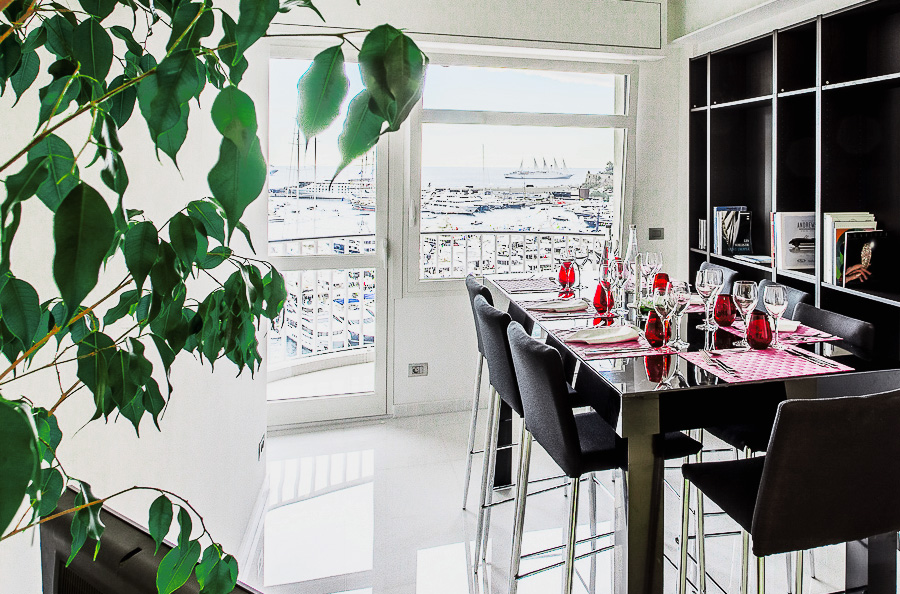 Discover the official program of the Monaco Formula 1 Grand Prix. 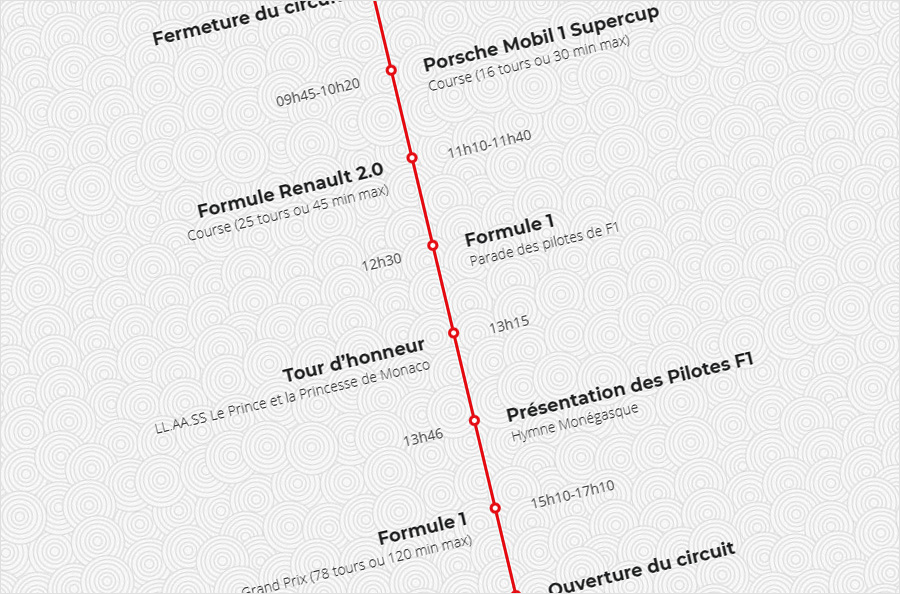 FIRST CLASS ORGANISATION has selected for you prestigious terraces with panoramic views showing 90% of the circuit and overlooking the starting grid. These venues are well-equipped and can accommodate 40 guests. It is the perfect package for your private stay with friends and family or for entertaining your guests. 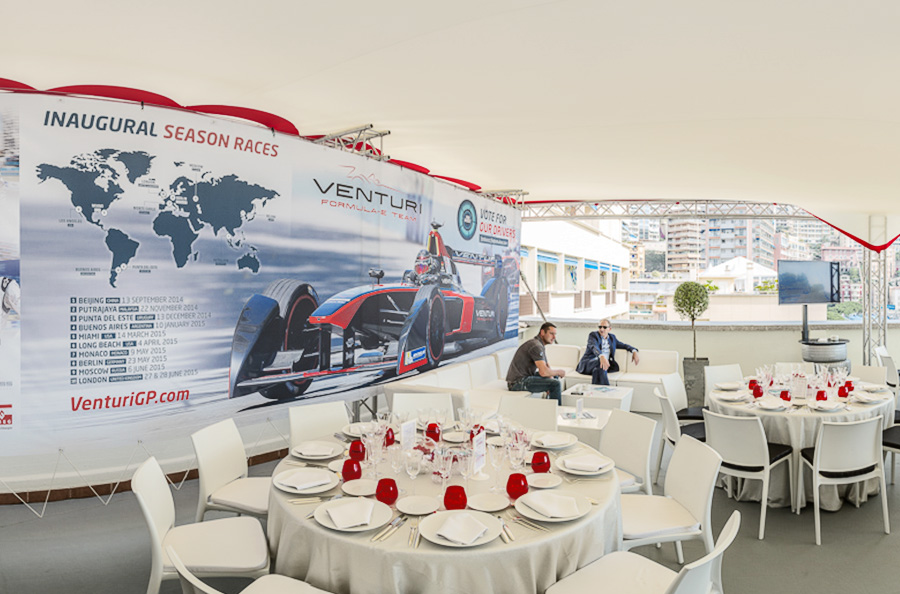 Pictures of our achievements

The history of the Monaco Grand Prix

The Monaco Grand Prix is one of the oldest and most prestigious car races in the world. Taking place in the Principality of Monaco, on an urban circuit designed by Antony Noghes in 1929, son of the President of the Automobile Club de Monaco.

The Monaco Formula 1 Grand Prix is organised by the association “Sport Vélocipédique de Monaco”, this group is the organiser of the Monte Carlo Rally and has changed its name to the Automobile Club de Monaco.

In the very first Monaco Grand Prix in 1929 there were 16 participants, of these 16 drivers 9 were French. After a relentless 100 laps, 7 withdrawals from the race, and just over 3h49mins of racing, the English driver William Grover-Williams was crowned the champion of the first ever Monaco Grand Prix. This prestigious event has become an annual occurrence, however, there have been 14 occasions the race has not gone forward due to war and other extenuating circumstances.

Every year thousands of spectators gather on the terraces along the circuit to watch the most atypical Grand Prix race in the world. The First Class Organisation venues offer a breath-taking panoramic view of the track, with some having a view of 70% of the track.

To date, the great Ayrton Senna holds the most amount of victories here in Monaco, having amassed a record 6 Grand Prix victories on this famous track. Graham Hill and Michael Schumacher follow closely both with 5 first place finishes, Alain Post has 4 Victories here, followed by Stirling Most, Jackie Stewart, Lewis Hamilton (the current world champion), and the most Monégasque of the Germans, Nico Rosberg all have 3 victories a piece on the Monaco circuit.

Team McLaren have been the dominant force on the Monaco course, boasting 15 victories on the track. Scuderia Ferrari have the second most amount of wins with 10, followed by Mercedes-Benz with 8. In the Nations standings, drivers representing the United Kingdom have become a force to be reckoned with, amassing a combined 41 victories, Italian drivers have won a total of 16 races, while French drivers have only won 7 first place finishes here.

Lewis Hamilton has the best practice time for the Monaco Grand Prix, he won pole position with a time of 1min 10seconds in 2019, however Max Verstappen holds the fastest time in a race with 1min 14seconds, this was achieved in 2018.

The layout of the legendary Monaco Grand Prix track has changed considerably over the years, yet it remains a temple for Formula One enthusiasts and racing car lovers. So all of us at First Class Organisation look forward to seeing you on one of our beautiful terraces for the 2020 Monaco Grand Prix. Our VIP terraces include Shangri-La, Palais Heracles, Ermanno Palace, Les Caravelles and Le Bristol. All of our venues come with private access, hostesses and catering. Our suites are decorated by our very own decorators with an elegant and modern style. With First Class Organisation you can reserve a chair for every guest around one of our staffed tables. From your covered terrace you can watch the trial sessions and races live or on the giant screens located around the circuit.